CRYPTO WARS EP11 S1: THE RISE OF THE ‘KOREAN CRYPTOTIGER’?

PREVIOUSLY ON ‘CRYPTO WARS’: In the latest episodes (From Episode V),  we saw that the survival of the Bitcoin ecosystem, relied on the sheer resilience of its code. A protocol known as SHA-256, a member of the SHA-2 cryptographic hash functions, as computed by the ‘notorious’ American, NSA.

SHA: stands for Secure Hash Algorithm  and, SHA-256 is spread in different section of the Bitcoin network ==>

This establishes the roots of the Bitcoin community not only in Japan, but also in China and South-Korea, the other ‘Big three Crypto-Tiger Economies’ of South-East Asia: South Korea has one of the most dynamic consumer cryptomarket, where the Bitcoin Local Average Price, (or #BLAP) is higher than the Bitcoin Global Average Price (or #BGAP) by sometimes, more than 20% !! . 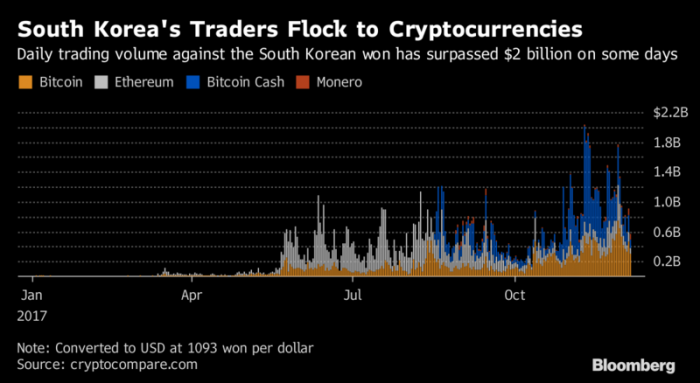 #BloomBerG Monthly chart of the number of crypto trades on Bitcoin & other Altcoins  in Korea, from Jan 2017 to Jan 2018, by Cryptocompare !

A survey via Cointelegraph stated on May 2018, that : 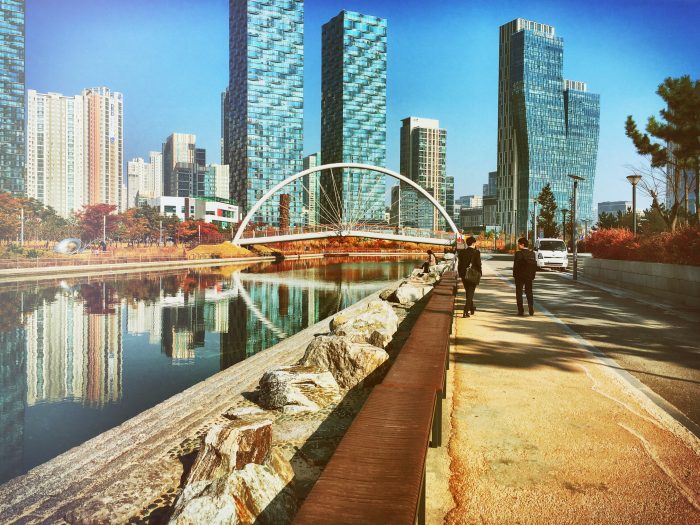 The Korean ‘frenzy’ or ‘Crypto Binge’, for the Bitcoin and Ethereum cryptocurrencies is something to be seen! Students, gamers, housewives, have already accessed the market via one of the many crypto exchanges available throughout the country:

Exchanges can be funded by MEGA-conglomerates called CHAEBOL. Korbit, for example, is the second most dominant exchange, and is owned by SKTelecom, the prime telecommunication business in Korea.

II. THE ROLE OF ‘OVERSEAS ARBITRAGER’?

The Korean demand for Bitcoin and other crypto assets, has reached a level unseen elsewhere in the world: There is a 21% premium price over the #BGAP: Bitcoin Global Average Price. A BGAP, you have to compare with the BLAP or Bitcoin Local Average Price, of course.

This ‘gap’ between demand and supply, created ‘emptiness’ or a vacuum, if you prefer. From the vacuum, came forth the value proposition, of course. ⇒ The gap, was naturally filled by foreign investors, also known as ‘Overseas arbitragers’: It has now created a huge opportunity and potential high ROI (Return On Investment)  for foreign exchanges, jumping into one of the most dynamic Consumer Crypto Market on the planet! (#CCM) 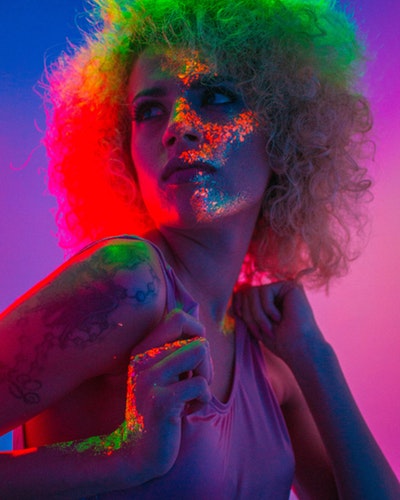 III. THE IMPORTANCE OF THE ‘PROOF OF COMMUNITY’?

⇒ The Korean crypto interest also excited the interest of ADMPers Fatoumata Gbaoré-Céli and Oleg Poshner, who met in Seoul in the spring of 2018,… In the new Korean ‘Crypto-Venice ’, or the ‘new Crypto-Hong-Kong’, to take a ‘local’ reference.

⇒ Remember the Bitcoin was certainly NOT advertised via ‘traditional dinosaur-technologies’ means, like paper press and TV;

⇒ NEITHER has Bitcoin, a CEO or a corporate structure, with shareholders and VC (Venture Capitalists), NOR a marketing department for that matter…

Today, with Oleg, ‘Fatou’, as she is known, set out to establish Proof-Of-Community for the Korean crypto ecosystem. It meant, finding out the average Koreans users demographics and then, trying to draw ‘consumers personae’.

Basically after all your segmenting of the datas, you then end up with consumers profiles that can be used for targeted Social Media Marketing campaigns, on Telegram, Facebook, Line, or any CRMs, …. IF It sounds like ‘Algonomics’ and that is because it is ‘Algonomics’ (Data + Artificial Intelligence for Business ) ! –  At the end of the day, Fatou believes, that :

“ Social Media applied to crypto Ecosystems, is simply ‘Data Science’ applied to ALL Medias and Human interconnections. Especially when it comes to consider the ‘Proof of Community’ aspect of a cryptocurrency. “

#ADMP we’ve been told, has been running such surveys and has made some available on its FaceBook profiles for viewing!

Fatou is listening to some of the finest Korean K+POP through her Deezer player! K-POP? : #K+POP is a type of Korean pop music drawn from a mix and blend of several type of pop music: American R’n’B, Hip-hop, jazz, electronic, Dance, Gospel, Reggae, …and Korean traditional pop-music, too.

NEXT WEEK, we will access the surprising facts revealed by Fatou’s survey of the users demographics inside the Korean Crypto Ecosystem. As she might find out that Social media analytics are often ‘downstreamed from cultural values’ ..???

TO BE CONTINUED Next week, the Season 1 Episode 12, of the CRYPTO WARS SAGA Carries on in the ‘complex Far East’, where Anime, K-PoP, Samsung smartphones and chips, Tae-Kwondo, Gangnam style and where Denis Rodman, des Chicago Bulls created ‘Basket-Ball diplomacy’: KOREA !!…with:

“THE RISE OF THE #SAMSUNG REPUBLIC ? ‘ In The MYSTERIOUS SATOSHI SAN, PART X” or 神秘的なサトシさん, PART X. By #TheDarkCryptoJeDi

#SHOUTOUT: to the #BeyondTheBlocks conference in SeouL !!

#ADMP is SELF-FUNDED, PLEASE TIP US: